Rabbit. I know, I know, its Thumper. Yes, it’s also Bugs Bunny. I know for a lot of people, this can be a big no-no. I was once a young-un (yes, if you can believe that) and I remember the shock underlined with a tinge of curiosity when I encountered Rendang Arnab (Rabbit Rendang) at a buffet at Seri Melayu in Kuala Lumpur. I just took the sauce, not the meat, and told myself then that it tasted just like normal rendang. I have an uncle who has pet rabbits and I certainly didn’t want to disappoint him by eating his pets…..
Fast forward several years (a few…) and I met the Greek chap who took me out for dinner and I had Rabbit Stifado Stew (in tomato sauce and shallots), and it was…. superb. What is this tasty and lean meat? It is very lean – and as I have been told quite a few times, if humans lived on rabbits (as the only source of protein) we will die. Rabbit meat is so lean, that it doesn’t provide us humans with enough fat that we need to survive. Wow.
A few years ago, we received a huge box of rabbit meat as a gift. (Thanks Panos and Josephine!) Yes, rabbit meat. And after making Rendang and Stifado, I had to figure out another different recipe that will go well with the meat. Google schmoogle (I can’t find the page anymore!) I found one that used white wine. I didn’t have any, but I did have Mavrodaphne. Mavrodaphne is a sweet red wine. It’s incredibly yummy. The Greek Orthodox church even uses it as communion wine.

So I adapted it. And hoped that it would taste nice. And it did taste nice. What a recipe. This is one of the ‘marinade the day/night before and cook in the oven’ lovelies that I love to make.

Flour, enough to coat the meat.
Salt and pepper
Butter
A (BIG, heh, no, moderate sized) glass of Mavrodaphne wine

1. In a big bowl that you can cover and store in your fridge, add the rabbit pieces (leave the head out – I cook that and the liver, heart etc for my cat Katiki) and mix thoroughly with the marinade ingredients. Cover. Leave in the fridge overnight (or at least 12 hours but no more than 24) 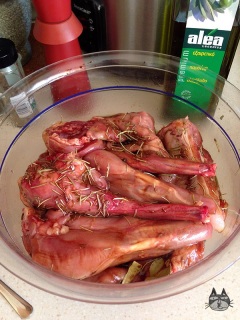 2. Before cooking, take it out of the fridge and let it sit outside until it gets to room temperature. When it’s not too cold to the touch, take the meat pieces out of the marinade. Rub off the marinade bits (like the rosemary and fennel seeds) as much as you can off the meat with your fingers.

3. Season the flour, and coat the meat pieces, tapping off access flour. Preheat the oven to 180 degrees Celcius.
4. In a frying pan, melt some butter. When its hot, fry the meat pieces until slightly brown. Place the pieces into a baking dish. 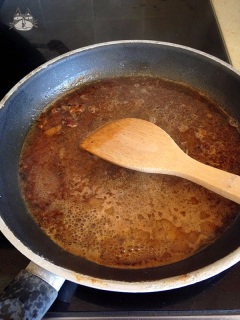 5. In the same frying pan, add a small knob of butter, and once it’s slightly sizzling, add the wine and reduce slightly.
6. Pour the wine sauce over the meat in the baking dish, and cover (with foil).
7. Bake in the oven for approximately an hour and a half. Uncover for the last 20 minutes so that it can get some colour.
8. Serve with roast potatoes. Enjoy!

What do you do with the leftover marinade?
You can chuck it out. What I like to do is to sieve out the bits, and keep the liquid. The marinade is quite flavourful and lemon-y. I use it when I make Greek Lemon Potatoes (recipe coming soon!) that I serve with the rabbit.