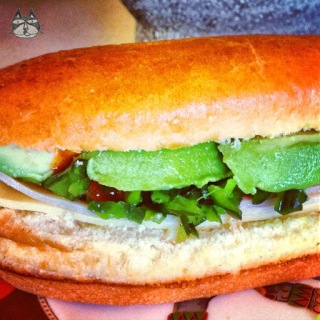 I love brioche. I am not a big fan of bread in general, but brioche is a god send. The Greeks have a similar brioche-like bread called tsoureki. The first time I had tsoureki was on New Year’s Day 2005 in Thessaloniki, Greece. It was cold, (it snowed a few days after, too!), and I had it with a slice with cheese. It is a rather sweet-ish bread, and the cheese was a light savoury Cheddar. It went together really well, it was such a surprise for me!

The brioche here is store-bought, and it isn’t too sweet and heavy. It is rather light, and the sweetness compliments the spicy Sriracha chilli sauce and the slight tartness of kyuri no shiozuke (Salted Pickled Cucumbers) that I use here. You can use other pickles that catches your fancy – the do chua (Vietnamese Pickled Daikon and Carrot) would do great. I didn’t have any, so the pickled cucumbers were my substitute.

A typical Banh Mi would include a spread of liver pate, but I have substituted it with creamy and soft slices of avocado. And the other fillings here are slices of Edam cheese and Turkey deli meat. And it would not be complete without a spread of Mayonnaise – and in this case, Kewpie Japanese Mayonnaise. You can use normal mayonnaise, of course, but I am partial to Kewpie. 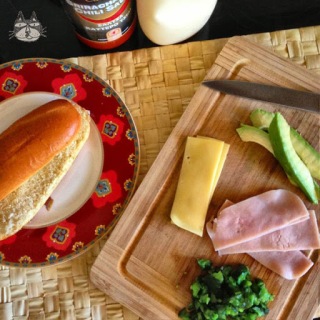 A brioche roll.
A slice of Edam cheese
A slice of Turkey deli meat
1/4 of a medium sized Avocado, sliced.
A tablespoon of kyuri no shiozuke (salted pickled cucumbers)
Sriracha Chilli sauce, to taste
Kewpie Japanese Mayonnaise, to taste
Salt and pepper, to taste.

Cut the brioche into 2 halves. Spread some mayonnaise on both halves. Add the avocado slices and the chilli sauce on one half. Add the cheese, meat and pickles on the other. Season with salt and pepper, to taste. Put the 2 halves together, and voila! A crunchy, spicy, sweet, tart, savoury, creamy and yummy sandwich for breakfast! 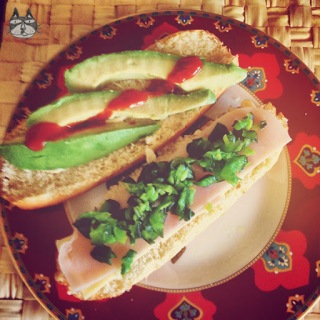